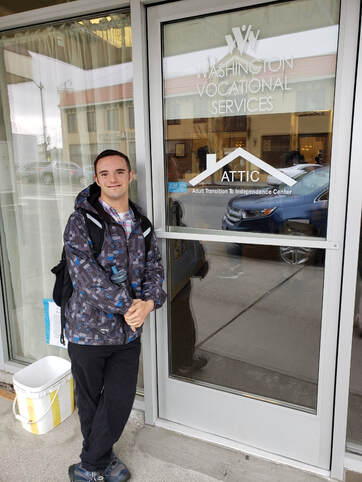 Asa Waham
We so appreciate the Attic program. Our son's enthusiasm to get up every day and go to  "his college" was wonderful. Over the last 2 years it has been a joy watching him going to many different businesses that have helped him better his skills for future employment. The teachers and staff at Attic have a very loving and caring attitude toward all the students. Their goal is to equip these young adults for a better life. No classroom can do that.

Going out into the community and having hands on experience has made a huge difference. Being able to focus on his strengths in the workplace through Attic has helped Asa to define what he will succeed at for employment in his future. Again, the dedication of each teacher is beyond our expectations.

This would be a great program for your child. Being at his graduation was a milestone and highlight for us. Coming home from graduation his next sentence was "well, it's time for me to get a job, Dad". And Attic will help with his job placement. We want to thank all of the teachers and aides for helping us with Asa's success.
​
-Joe and Darannie Waham, parents of ATTIC graduate Asa Waham
Sean Curtis 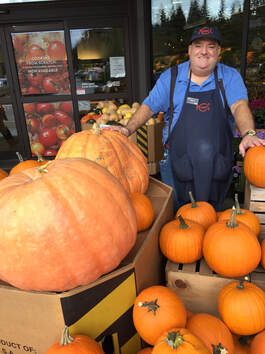 Sean Curtis
I would like to comment about the need for the Employment Support that has been given to my son Sean Curtis over the years by Washington Vocational Services.

WVS has been an important part of his work experience. His job coaches and others have been an ongoing support on the job and has made it possible for him to succeed in the workplace.

To me, the developmentally disabled add to a company or other organization and enable them to fulfill many positions that help make a workplace successful.
​
Without the benefit provided by organizations such as ARC or WVS, the lives of the disabled would be without working opportunities.
​
-Archie Curtis, Sean Curtis's Father​
Lawrence Shipula 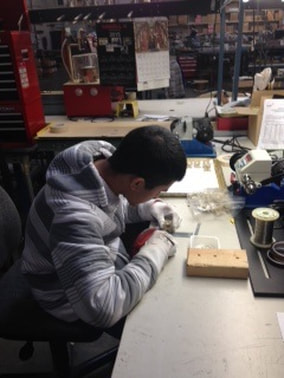 Lawrence Shipula
Electronetics is an assembly company that creates off-grid power transformers, high frequency magnetics, and custom inductors for the medical and aerospace industry. The company is a social enterprise of Northwest Center. All revenue generated from Electronetics helps fund Northwest Center’s education and employment programs. Over the years the Everett branch has hired many WVS clients. However, Lawrence Shipula, their most recent hire, has been the most successful.

On Lawrence’s second day, it was clear he had a unique gift. He brought a homemade tool that made twisting wires through transformers a much quicker process. Since fourth grade Lawrence has been inventing tools similar to this one. Lawrence is a truly unique individual with a gift for detail and invention. He plans his process from beginning to end and documents each step with drawings and specific instructions. He also picks up on tasks quickly, which allows him to do every job in the Everett plant without accommodations. It is clear Lawrence has found his place at Electronetics. His manager, Scott Patterson, is extremely supportive and continues to challenge Lawrence by teaching him new skills and allowing him to be creative with inventions.
​
Lawrence’s goal is to become an engineer so that he can design and improve products and we have no doubt he’ll reach it. Electronetics has allowed him to thrive and encouraged his inventive spirit since day one. The surrounding community found Lawrence’s story so captivating it was picked up by the Seattle Times, Seattle Business Journal, and featured on Evening Magazine. Not to mention, Electronetics received the Governor’s Award for their efforts in supporting Lawrence.
​
-Lawrence Shipula and Electronetics
Dean Sutton 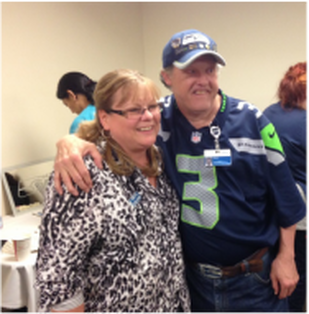 Bretta Williams and Dean Sutton
Dean was hired at Providence Hospital 35 years ago on May 1st of 1980. He started working in the kitchen and over the years has changed titles, managers, and departments multiple times. Dean stayed employed at the hospital during the expansion to Providence General. He learned the new layout of the hospital quickly and was very grateful for his amazing supervisor who allowed him to have extra job coach support during the transition. Dean ended his career in the linen supply department distributing clean linens to each floor and bed in the hospital. This allowed Dean to socialize with people across multiple departments and floors, and he became well-liked by all of his co-workers.
​
Despite his disability, Dean was able to work 40 hours a week, allowing him to receive full benefits and have a retirement plan. When Dean retired on May 5th, 2015, over 100 people stopped by his retirement party to wish him well and congratulate him on his multiple years of service. Dean now enjoys his retirement in the home he and his wife of 25 years share in Everett.

Tyler Haggen was looking for employment that satisfied his preference to work outdoors and with his hands. This led to an assessment at the sanitation department in Sedro Woolley where Cliff and Leo, the district manager, were happy to have Tyler come on board and be a part of their team.
​
Tyler started in the summer of 2014 and his responsibilities included sweeping the lunch room, taking out the trash, arranging TVs and computer monitors, and cutting the cords so they could be stacked and recycled. He enjoyed the tasks, and after each shift Tyler grew more comfortable with the work and being around his co-workers. They accepted him as one of their own, giving him a hard time and joking with him as they did with each other. Tyler loved it and dished it right back!

Tyler’s Employment Consultant (EC), and Leo spoke candidly about Tyler being hired on part time, providing the county budget would approve it. In the mean time, Tyler continued learning and completing tasks that the regular crew did not have time for. The EC worked closely with Tyler and Leo to insure Tyler was meeting company performance standards and learning new tasks as needed.

In the coming months, Tyler’s responsibilities were increased to cleaning the bays where the city vehicles come in for routine maintenance. He learned to grease the chains on the garbage trucks and detailed the inside. Tyler uses machinery such as hand tools, leaf blowers, and pressure washers. Eventually, Leo would like Tyler to learn how to operate the back hoe.

When the city took on the task of recycling light bulbs, Tyler was put in charge. They created a work space for him where the required recycling boxes for the lights were located and where Tyler would take the bulbs and place them in the boxes.

At the beginning of the year, Leo completed paperwork and submitted proposals to the city explaining why Tyler was needed and the important work he was doing at the facility. This summer Tyler was officially hired! He has received more hours, is beginning to get involved in the yard waste department, and is working more closely with the community. Since starting at the Sanitation Dept. Tyler has done a complete 180 in performance and attitude. He enjoys going to work and never misses a day! Leo has big things planned for Tyler in the coming years!

-Tyler Haggen and the City of Sedro-Woolley
Jeffrey Jacobs 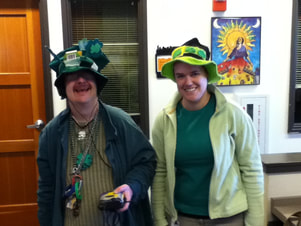 Jeffrey Jacobs & Brandy Riddle
Jeffrey Jacobs celebrated his 15th year of employment at Solid Ground this year. Solid Ground is a non-profit organization dedicated to providing access to organic and nutritious food for low-income families in the Seattle area.

For the past 15 years, Washington Vocational Services’ client Jeffrey Jacobs has worked in the Lettuce Link department. He packages large bags of seeds into small envelopes and labels the seed for distribution at food banks. After doing the same task for many years, he expressed to his manager that he would like more variety in his work. His manager, Nate Moxley heard his concerns and organized new tasks for Jeffery to take on. His duties now include packaging diapers and spices, completing projects for the cooking department, and gathering seeds for children to make artwork.
​
When asked about his job, Jeffrey said, “I’m celebrating 15 years and I love it. I love the people.” Jeffrey’s relationships with his coworkers really shine through as they celebrate his diversity and enthusiasm for the job. They especially look forward to holidays because Jeffrey loves to dress festively for all of them. Blue hair for the Seahawks, red, white and blue for independence day, and his St Patrick’s day gear includes glasses, shamrocks and head to toe green. Solid Ground often has after-work events to promote team bonding and inclusion. Jeffrey is invited to the gatherings but he doesn’t always have transportation. Solid Ground staff work with Jeffrey to pick him up and drop him off at home. Jeffrey also enjoys one on one lunch dates with his coworkers and has established great relationships with them during his 15 years.