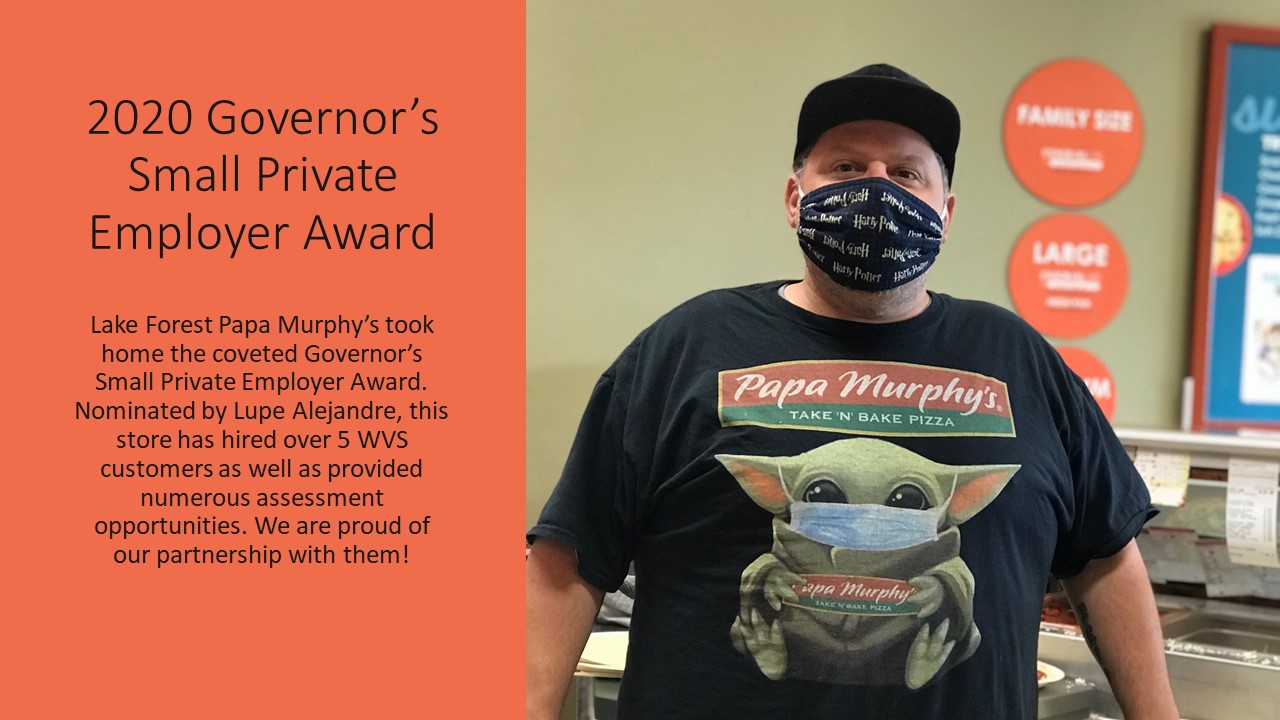 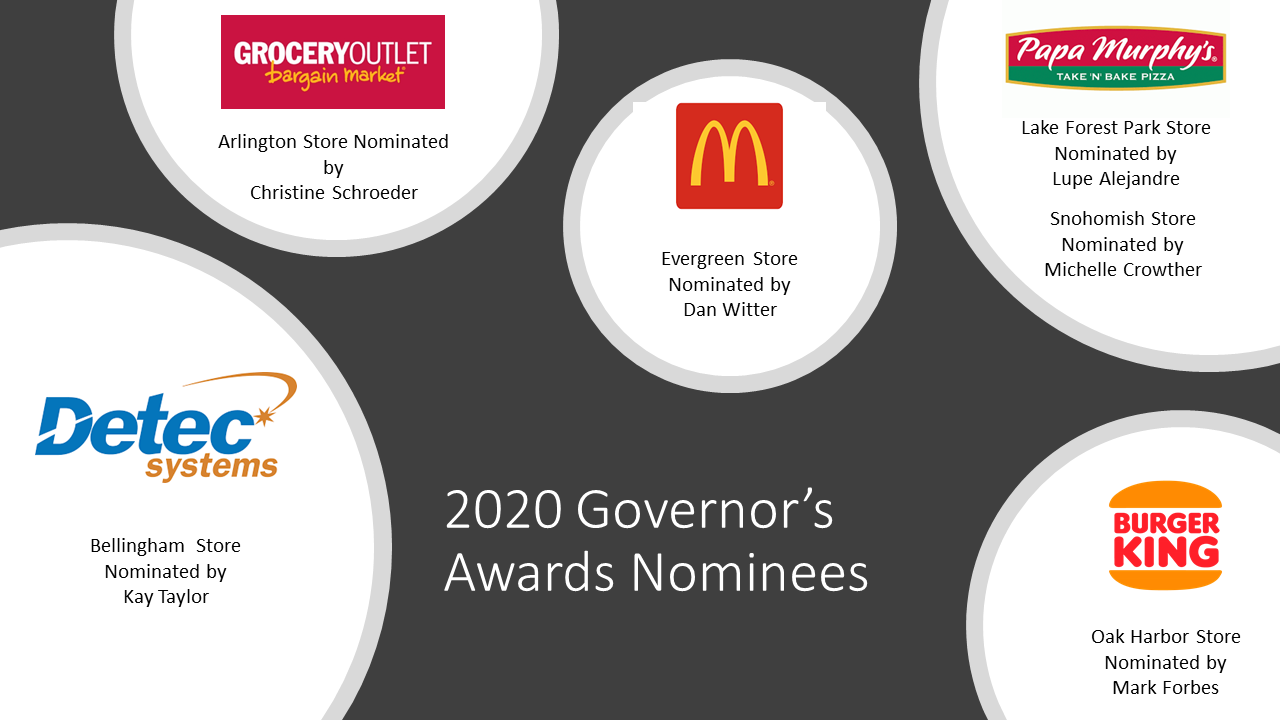 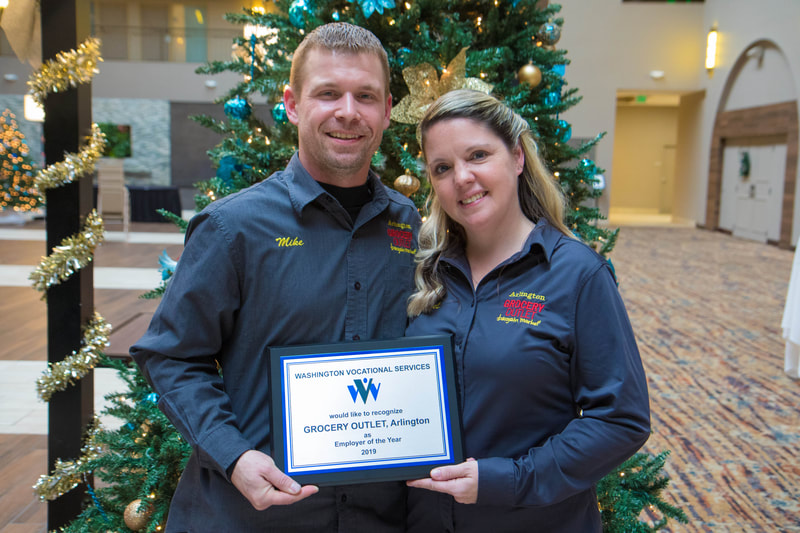 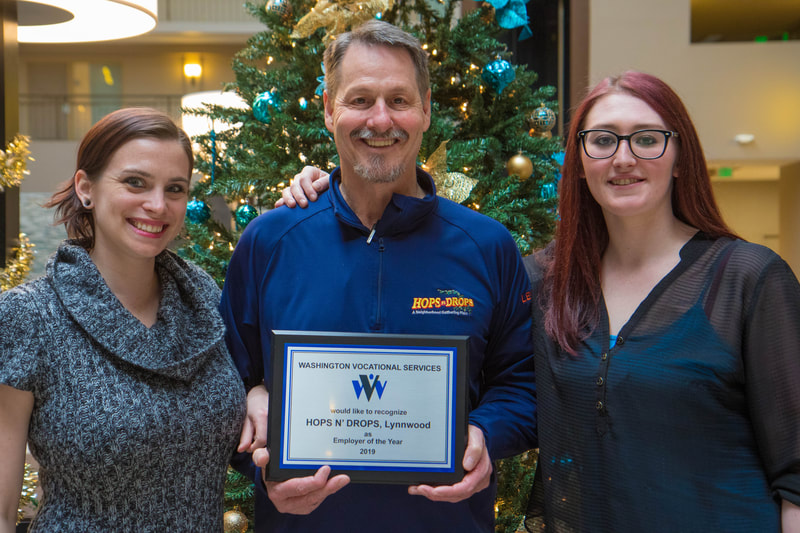 2019 Governor's Awards Nominees
We would like to take a moment to congratulate all of Washington Vocational Services employers who were recognized at the Governors Employer Awards ceremony on November 1st. Nominated for the 2019 Washington State Governor awards were:  Colonial Pantry in Edmonds, Haggen Northwest Fresh in Stanwood, Haggen in Woodinville, Hops n Drops in Lynnwood, Pacific Science Center Café in Seattle, Ross Dress For Less in Woodinville, and Welcome Home Oak Harbor Senior Memory Care in Oak Harbor. We are very proud of the partnerships we have with our many exemplary employers and champions of supported employment. 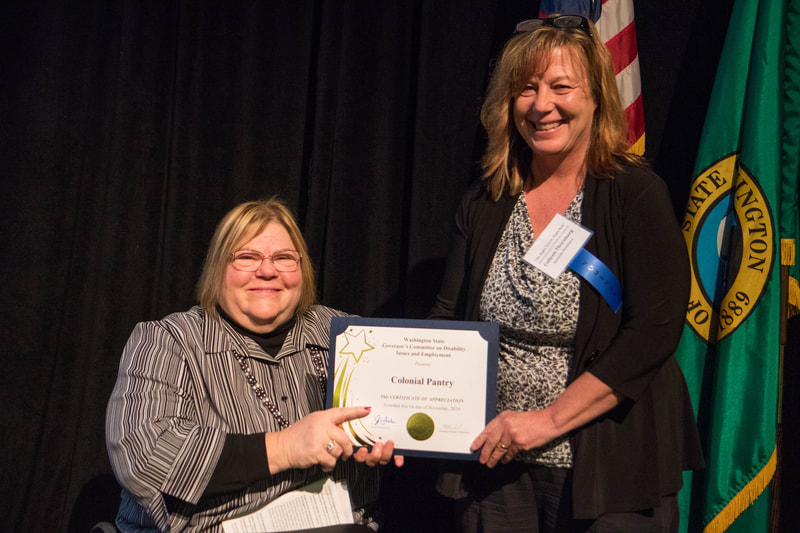 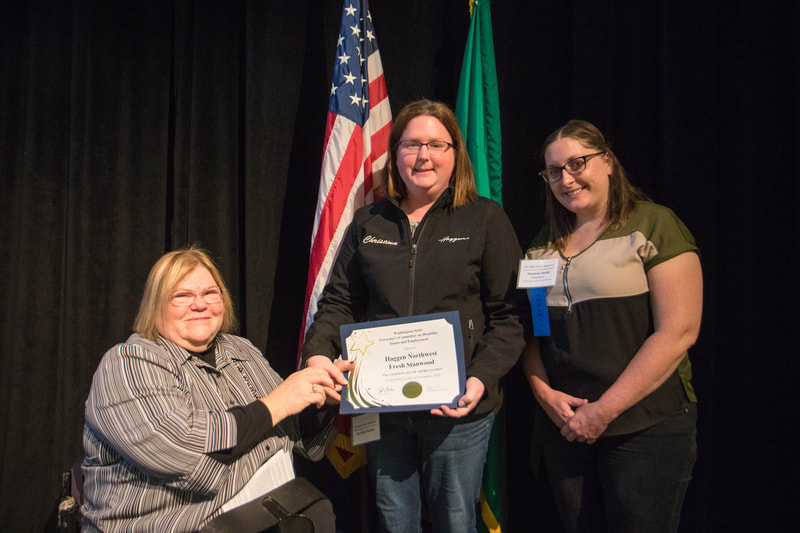 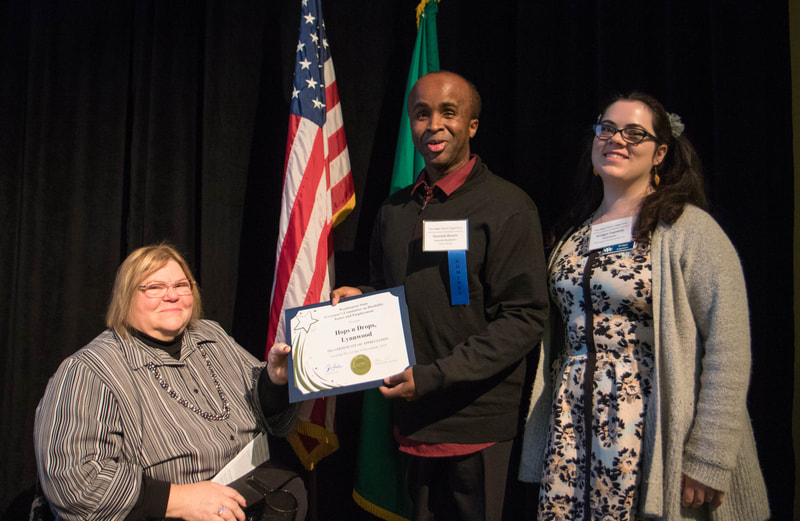 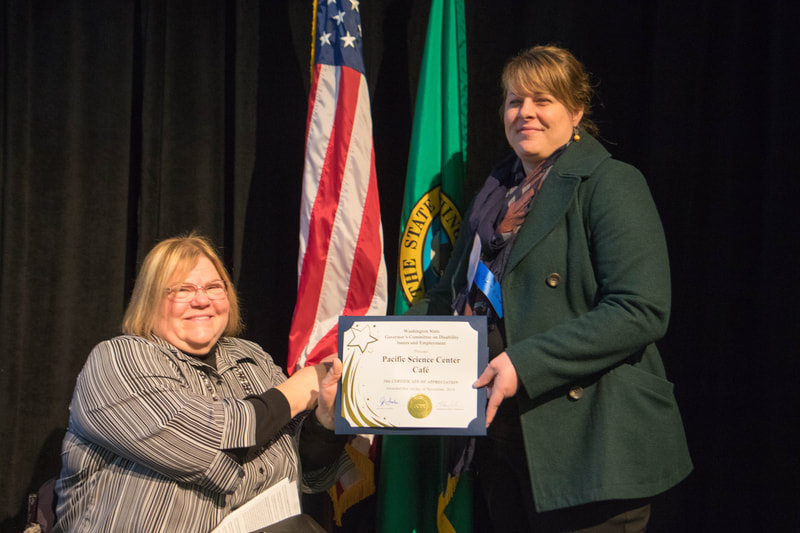 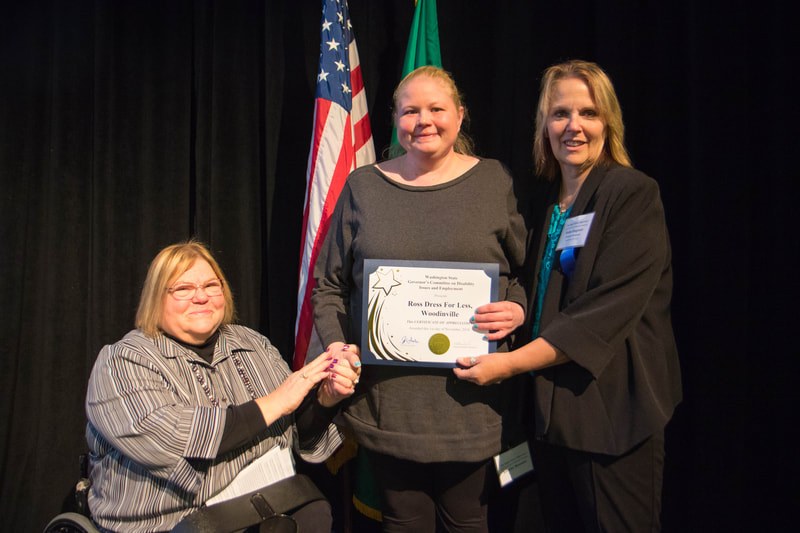 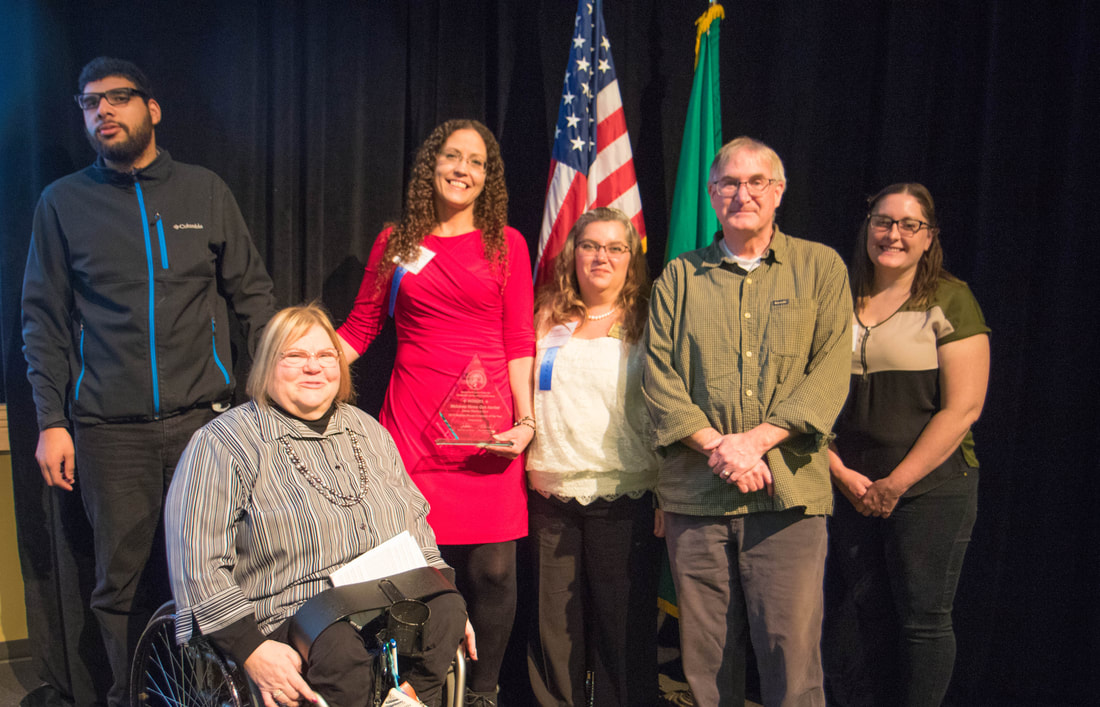 2019 WVS Direct Support Professional
WVS is extremely proud to announce that King County team member, Colleen Thornburg received the prestigious Governor’s Direct Support Professional Award. WVS employees have been recognized for this award the past 4 years and we should all take pride in being recognized for the high caliber of professionals who are employed with WVS. Colleen’s submission included strong support documents from our stakeholders, and we all extend a heartfelt congratulations to her! 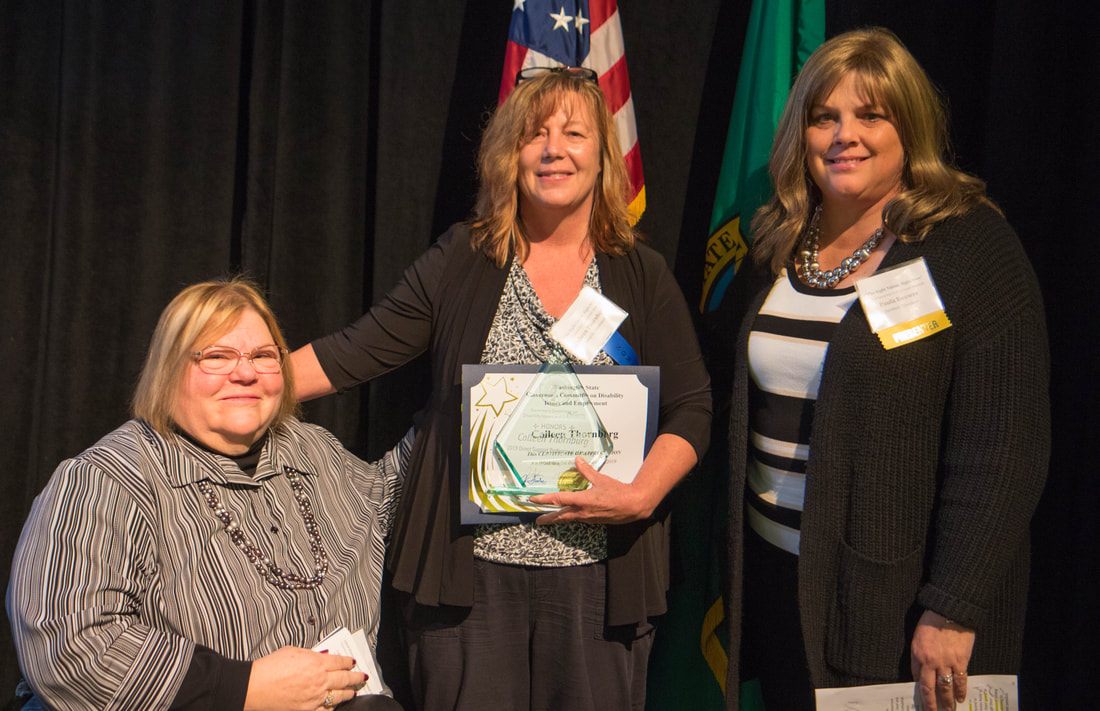 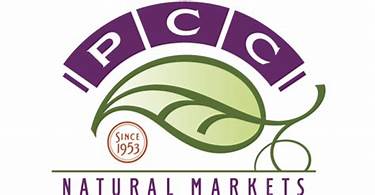 For the last several years, PCC Market has proven that they are a huge supporter of Supported Employment. Currently, the company employs three of our clients at two store locations. They also provide employment for at least one other supported employee through another agency.

If I could only give one example of how supportive they are I would point to one client in particular: Sean Curtis. Sean has worked at the PCC Market location in Edmonds for the last three years. He works there as a custodian, and it’s his job to keep the store looking neat and clean.
Sean has had immense challenges over the last few years, and PCC Market has stood by Sean throughout these challenges.
In December 22, 2016, Sean had many unplanned absences from work. His mother, Judy, was in poor health and unable to take care of herself. Much of that responsibility fell on to Sean to take care of his mother because there were no other alternatives. These absences combined with his mother’s illness put an enormous strain on Sean, and he was in constant fear of losing his job. While any other employer might not have been sympathetic, PCC Markets took an understanding tone and worked with Sean throughout that time period until caregivers were established so that Sean could return to work. 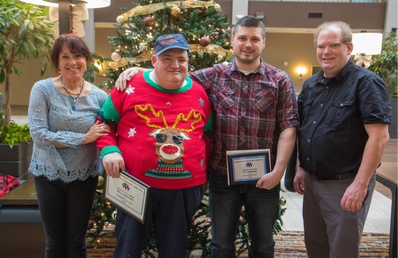 In December 5, 2017, Sean had a terrible accident in which he slipped on ice in front of his house and broke his wrist badly. The injury required two surgeries to repair and required a medical leave of absence so that he could heal. PCC Market provided Sean with short-term disability insurance, which they did not have to provide, so that Sean could maintain some sort of income until Sean was able to return to work without any restrictions.

On July 8, 2018, Sean suffered another setback when his mother, whose health had continued to decline, passed away. PCC Market provided Sean with bereavement leave.  Sean returned to work and put his best effort forward.
Most recently, Sean moved to a new home closer to work, helping relieve some of the transportation issues that Sean has had.

All throughout this, PCC Markets has been amazing with their support for Sean. With so many obstacles that had been placed in Sean’s path, it was a tremendous credit to Sean to know that PCC stood by his side throughout these unfortunate circumstances.

Sean’s loyalty to PCC Market is stronger now than it’s ever been, and it’s because of the loyalty the PCC Markets has shown Sean throughout these ordeals. As a result, Sean has increased his hours and wants to take on more responsibilities. His confidence in himself has grown and allowed him to flourish. He is more supportive of his fellow employees than ever. After Sean’s mother passed, he had the option to move down to Centralia near his father. Instead, because of the support and friendships he built through supported employment at PCC Market, Sean chose to stay so the he could work at PCC Market.
​
PCC Market deserves to be recognized by WVS for his wonderful show of support for Supported Employment and its support for Sean. 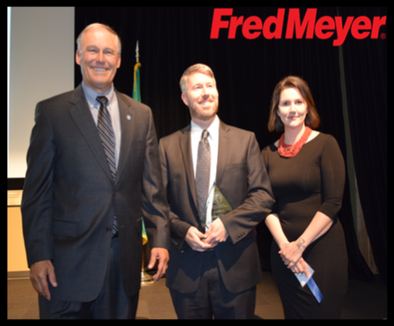 ​Fred Meyer Seattle store #122 won the 2018 Governors Large Employer Award following a submission by WVS’s Laura Cox. The store, led by Tyler Cook and Litty Ames, wants to make sure it has done everything in its power to make each job placement a successful one. Fred Meyer’s application process is designed to level the playing field for individuals with disabilities. Fred Meyer truly cares about inclusion and not just about the diversity of its own team but about its customers and shoppers in general. A portion of the orientation training is about how to best support its shoppers with disabilities. Knowing it puts such an emphasis in this area speaks volumes to the individuals WVS has supported in working there. One of those individual’s guardian had this to say about the store, “They empower people to be a part of a greater whole, and encourage career growth and development in situations that can be challenging at times”. 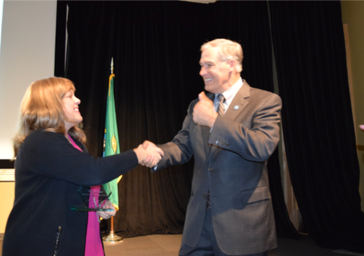 ​On October 17th, 2018, Governor Jay Inslee publicly recognized WVS Deaf Services Lead Paula Bouwer for a prestigious award. Paula was this year’s winner for the Direct Support Professional Award. The award, which is hosted by the Governors Committee on Disability and Employment Issues (GCDE), was created to put a spotlight on professionals who demonstrate excellence in supporting individuals with obtaining and/or maintaining inclusive and meaningful jobs. A panel of judges selected Paula for this once-in-a-lifetime award because of the best practices she demonstrates while supporting customers. Her nomination submission included the following regarding Paula’s success, “For the past 24 years, Paula has positively impacted numerous lives by using her job developing and networking skills to enable individuals to obtain the job they desire. She has heard every concern there is and she has a response to all of them. Paula truly does not take no for an answer. She may accept a ‘not today’ but never, a ‘No’. It’s because of this tenacity that she has such a high successful outcome rate”.
We are so proud of Paula, and happy to be adding this new accolade to her impressive list of achievements!